Do you have any question, request or comments? We are glad to assist you 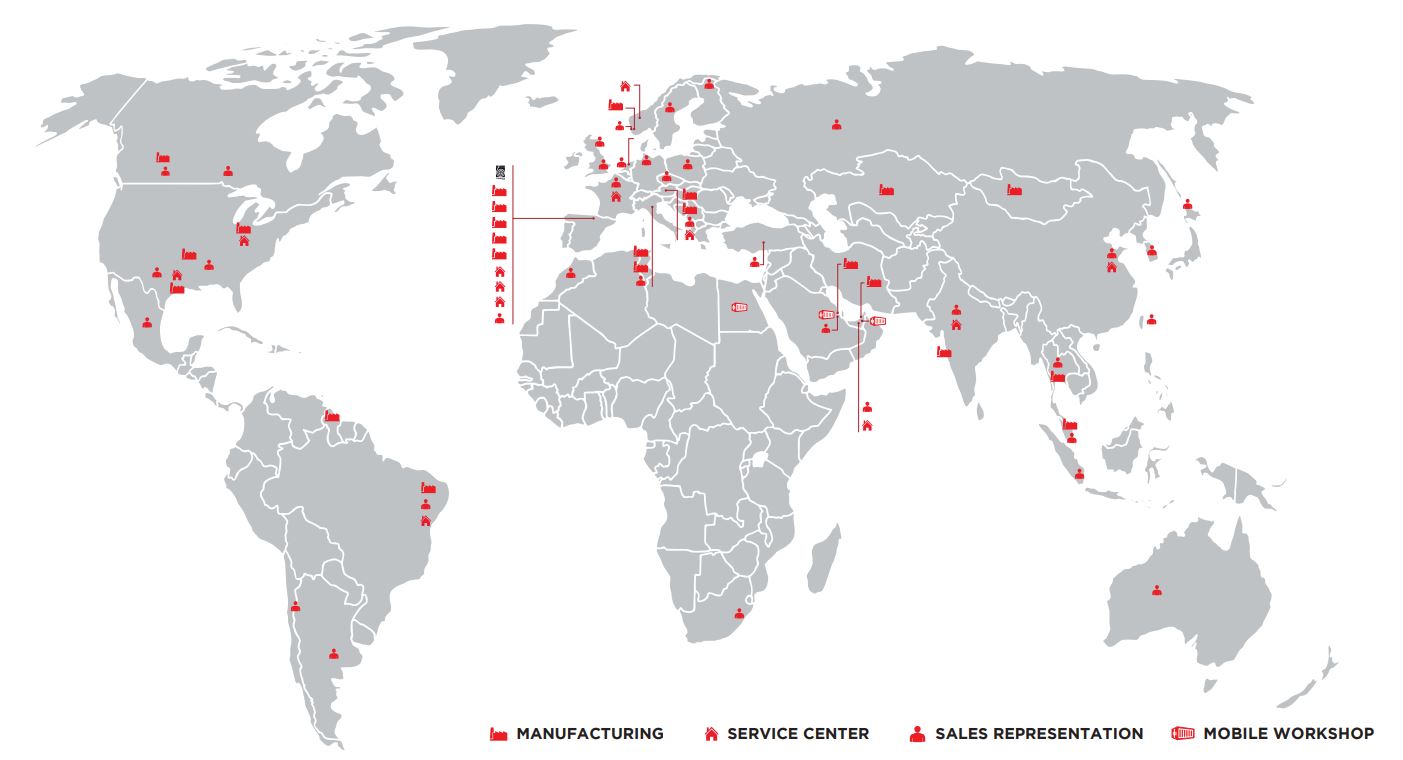 Higher Grade in Market Business Administration, Doctor Honoris Causa from the University of Stuttgart (2008), he began his professional career as Head of Purchasing at Adam Opel AG in Rüsselsheim in 1979.

From 1980 to 1993, he carried out diverse duties at Opel and GM Europe and in the USA, becoming World Executive Purchasing Director at GM Corporation in Detroit (USA).

Between June 2009 and July 2012, he was President of ANFAC (Spanish Association of Automobile and Truck Manufacturers) and later a member of it. He also held a leading position on the German automotive manufacturers association (VDA).

In 2009, he was appointed President of the Wolfsburg soccer team, a position which he held until 2018.

Bachelor of Law and Bachelor of Economics and Business Administration (University of Deusto). He has developed practically his whole career at TUBACEX, which he joined in 1982. In 1992 he was appointed the CEO and General Director of the Company and in 1993 he took over as President of the Board of Directors. He is a director of Iberdrola Renovables. He has also been a member of the board at IMQ S.A. He is a member of the TUBACEX Board since 1992.

Graduate in Mathematical Sciences from the Autonomous University of Madrid, this executive has more than 30 years international experience in the IT, Energy, Infrastructures and Industry sectors.

Most of her career has been at Microsoft. In 1991, she joined Microsoft Ibérica as a Technical Support Director and moved to the parent company in Redmond (USA) in 1996, working alongside the CEO, Steve Ballmer, as Corporate Strategy Director. In 2000, she was appointed World Director General for Sales and Marketing to Microsoft Partners and in May 2002, she returned to Spain to take over as Executive President of Microsoft Ibérica. In 2008, she was appointed Vice-President of Consumption for Europe.

On October 1st 2011, she joined Siemens as Executive President in Spain, a post that she held until December 2018. She also has more than 10 years experience as a member of the Board of Directors of IBEX 35 companies, having been a Director of Banesto, Bolsas y Mercados Españoles, Acerinox and Bankinter. She has also been the non-executive president of Siemens Gamesa.

She is a regular collaborator in innovation and leadership issues in different media. She is firmly committed to improving education in Spain and developing technical vocations for girls, and for this reason, she cooperates with numerous NGOs, universities and business schools.

Senior partner and managing director of The Boston Consulting Group, currently I the Vice Chairman of the Energy Practice. Since 2008 he has have been the Global Leader of BCG’s Energy practice, for which he was previously the Leader in Europe, Middle East and Africa. Member of the BCG global Client Team leading the Seat at the Table Initiative.

Over the course of his more than 30 years in the energy and environment industry he has supported companies and CEOs in the power, gas, oil and green energy sectors to develop their strategic visions and transform their companies by defining and executing their change and transformation agendas. Has advised governments and regulators across the world on issues related to energy regulation and sustainable development.

In 2013 was honored to be named one of the “Top 25” most influential consultants of the year by Consulting Magazine, and chosen by The Wall Street Journal to become one of “The Experts”; an exclusive group of energy thought leaders.

Throughout his career he has published numerous articles and reports on energy, environment, and organization issues and I have become a frequent speaker on these topics; participating at forums such as WPC, IEF, GECF, ESADEGeo, Petrotech, Aspen Institute and many more. He is also an advisory board member of several foundations, companies and educational institutions.

With a solid technical training in the commercial and financial fields, she has spent more than fifteen years developing her professional activity as Consultant for the patrimonial management of real estate and financial assets from her organization in Luxembourg.

She has been Director of various national and foreign companies, and is currently Vice-President of “Inversiones Industriales Txindoki” and Director of the Aristrain Corporation.

Chairman and CEO of SENER since 2000, an ingenieering group that invoices 780Million euros and employs more than three thousand people very wellknown for his innovation capacity and international performance.

He joined the company in 1986 as Deputy General Manager, after having worked for many years as Technical Manager in a construction company and, after that, founding and managing Seaplace, an ingenieering company specialized on offshore platforms.

He has a Master in Oceanic engineering by M.I. and he is Doctor on naval Engineering by Universidad Politécnica de Madrid, where he finished his academy training with the PADE from IESE Business School en 1990.

Nowadays is Chairman of IESE Business School Alumni Association and he has been the Chairman of the “Círculo de Empresarios Vasco” until April 2018.

Born in Pontevedra, he holds a PhD in Naval Engineering granted by the Superior Technical School of Naval Engineers (ETSIN) of the Technical University of Madrid and a Master’s Degree in Marine Engineering by the Massachusetts Institute of Technology (MIT).

He is currently a director of Iberdrola and President of Seaplace S.L., H I Iberia Ingeniería y Proyectos S.L. and Howard Ingeniería y Desarrollo S.L.

He has been a member of the Board of Directors of Iberdrola Renovables S.A. (2007-2011) and board member and part of the Audit and Compliance Committee of Gamesa Corporación Tecnológica, S.A. (2013-2015)

He has been the Head of the Technical Department of the Fidenavis, the Spanish Ship Classification Society.

He presides over the Spanish Institute of Engineering since 2012 and was the Dean of the Official School of Naval and Marine Engineering of Madrid and Spain.

Born in Eibar (Gipuzkoa), she holds a Higher Engineering Degree on Telecommunications and a Master’s Degree in Business Administration by ESIC.

General Secretary to Confebask from January 2011 to October 2014, in her political career she has hold the position of Head of the Department of Transport and Public Works of the Basque Government (2005-2009), Head of the Department for the Development of Rural Areas of the Provincial Council of Gipuzkoa from July 2003 and Member of the Basque Parliament for Gipuzkoa in the VI Parliamentary Term (1998-2001).

In the business world, she has performed Research work for the Technological Association Tekniker, from Eibar; Technician in the IT Department of the Central Services of the Basque Health Service; Head of the IT Service of the Mendaro Hospital; Research Associate in Vicomtech Association.

In the teaching world, she is currently pursuing her doctorate in Sociology, among other complementary training activities.

Naval Engineer by the Polytechnical University (Madrid) and Master in Economics and Business Management by the IESE (Barcelona). He is currently Chairman of Cartera Industrial Rea S.A. and non executive Chairman of Global Power Generation. He is as well ViceChairman of Gsacan SA and board member of MIBGAS Derivatives. He is Chairman of the Lloyd´s Register of Shipping Spanish Committee. Before joining REA, all his career has been linked to the energy industry, having been the Financial Director for Enagas, INH and Repsol, Vice Chairman of Drilling and Production and Vice President of Chemistry and director for Repsol, Gas Natural and Petronor, or President of the IESE Alummni Association. From 2002 to 2007 he was the President of Enagás.He has been board member of Europac, Mecalx and Banco Popular.

Industrial engineer. He began his professional career in Germany, as Project Manager and Sales Director in several companies of the industrial sector. In 1991 he created the company Autokomp GmbH that focuses on the development of the businesses of several Basque companies in the German automotive sector. In 1996 he became part of the recently created Corporación Industrial Egaña (currently known as CIE Automotive), where he was the Strategy and Sales Director. In 2002, he took over the General Management of the Metal Business Unit and in 2005 he was appointed Managing Director of the Group. He was appointed CEO of TUBACEX in January 2013.

Born in Gernika, he holds a Degree in Civil Engineering. He currently holds the position of Non executive Chairman of the Board of Directors of CIE Automotive and Global Dominion Access. He began his professional career as Branch Manager at Banco Bilbao, from 1979 to 1985. After a short spell as freelance engineer, in 1988 he was appointed General Director of Nerisa, where he remained until 1993, when he joined SEAT as Strategy Director.

In 1995 he played a relevant role in the creation of INSSEC, of which he became Chief Executive Officer, a role he fulfilled until 2010. As Executive Chairman of CIE AUTOMOTIVE he has been very active in both strategic management and financial issues.